“I am Alpha and Omega, the beginning and the ending, saith the Lord, which is, and which was, and which is to come, the Almighty.” Revelation 1:8

Somewhere in the dank, dark basement is a blue tub. And, in that tub is an abundance of crumpled bits of wrapping paper left over from Christmases past. And, 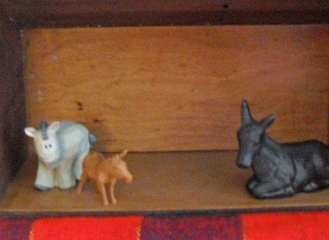 in one of those bits is the baby Jesus figurine that is usually hidden away in a buffet drawer until the morning of Dec. 25.

There’s no doubt a blog in that — losing the reason for the season in a house that is already decorated ABT. (All But Tree — wink, wink, grad students.) But, that isn’t where I’m going.

On Facebook, my Fresh Mercy mini-blog is presenting a name of Jesus and a corresponding scripture each weekday. Lamb of God, Light of the World, the Amen, Beloved Son, the Rock, He Who Liveth and Was Dead and so forth. Some of the name scriptures are from the Old Testament, particularly the book of Isaiah. Most are from New Testament books written by the Apostle John, one of the 12 men who spent three years or so directly ministering with Jesus.

It’s those latter verses that have captured my attention. John seems to have understood Jesus at a level that even the other disciples did not. It likely not an accident that he was the one Jesus chose for the vision of Revelation. And, John’s awareness of the fullness of Jesus’s identity is most often expressed in names that make me shiver. They’re throughout his gospel, where every action seems to be tied to one. And, in Revelation, the names fly fast and glorious, almost as if there is not enough space on the page or in the world (as John once suggested) to contain just who God the Son is.

Those thoughts were on my mind when I realized the wee figurine that we once used to set the story of the Nativity in our daughters’ minds was missing. They’re nearly grown now. They know the story. We know the story. And, it is a story far too big to be, well, contained.

So, resin baby Jesus will stay wherever he is and I am going to do my best to celebrate a Christmas and a life that lets God the Son be God. Vast, complex and full of mysterious glory.

A long-time journalist, Nora Edinger also blogs and writes books. Her Christian chick lit and faith-related non-fiction are available on Amazon. She lives in Appalachia, where she is part of a three-generation, two-species household. View all posts by JOY journal

3 thoughts on “I lost baby Jesus!”

Check out my Fresh Mercy blog, too!

Check out my Fresh Mercy blog, too!